Board Members Elected to Leadership Roles 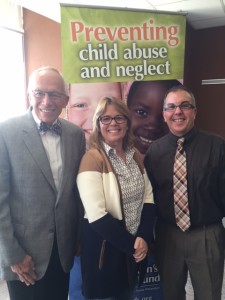 During the Children’s Trust Fund’s (CTF) annual fall board meeting October 14 and 15, 2015 in Jefferson City, the board elected Margaret Peggy Krokstrom, Chesterfield, as the new board chair, and John Heskett, Ed.D., also of Chesterfield, as the new chair-elect. Krokstrom replaces outgoing board chair Charmaine Smith, University City, who has served in the leadership role for the past two years.

“It is an honor to be working with The Children’s Trust Fund of Missouri”, said Krokstrom.  “As the new chair of the CTF board I can assure you that the commitment, passion and focus of this organization are dedicated to all of our children in Missouri.  We will continue to work diligently on the issues that promote awareness and prevention of child abuse and neglect.  Your support and contribution to these efforts is encouraged, welcomed and appreciated.  Please consider helping us today.”

Krokstrom, who initially served on the board from 2006 – 2009, was appointed by Governor Nixon in 2014, and will serve a two-year term as chair until October 2017. She currently serves as Team Leader in Operations and Service Training at Edward Jones in St. Louis. Previously she was the program coordinator for CHARACTER Plus for the Cooperating School Districts in St. Louis, has been an education consultant for several St. Louis area school districts as well as a classroom teacher in the Clayton School District.

Heskett was appointed to the CTF Board in April 2015.  He serves as an adjunct professor of education at the University of Missouri – St. Louis and as an education consultant for BAFC Consulting.  He previously served as the executive director of the Missouri Council of Administrators of Special Education.  Heskett will serve as chair-elect during the same time period ending 2017.