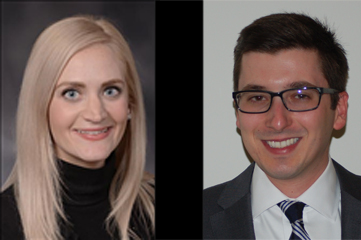 Rep. Arthur was appointed by Missouri House Speaker Todd Richardson on February 13. She represents Clay County (District 18) where she was re-elected to her second two-year term in November 2016.

In addition to her legislative duties, Rep. Arthur works as a Project Manager at VML, a global advertising agency.   Previously she worked in Kansas City as a middle school teacher; teaching English Language Arts at Urban Community Leadership Academy, a charter school in Kansas City.

Rep. Arthur is a graduate of the International Baccalaureate Program from North Kansas City High School. She earned her Bachelor’s degree in History from Smith College, Northampton, MA, and a Master’s in Education from the University of Missouri-St. Louis.  She and her husband Russell Shankland reside in Kansas City.

Heberle earned his Bachelor’s degree in Political Science from the University of Central Missouri, Warrensburg, and his Juris Doctor degree from Washington University School of Law in St. Louis. He was recognized in 2016 with the Up and Coming Lawyers Award by Missouri Lawyers Weekly.