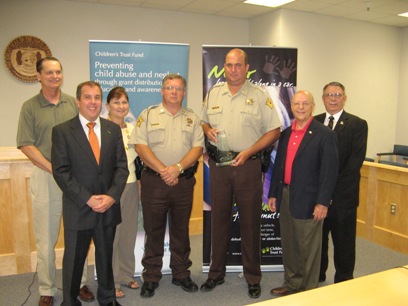 The CTF Board of Directors established this award in honor of the late Richard P. Easter, who is remembered for his commitment and leadership in promoting statewide prevention efforts to better protect Missouri’s children. CTF presents the award each year to a distinguished law enforcement officer in Missouri for exemplary contributions to the prevention of child abuse and neglect.

Lt. Ryan Holder, a 12 year veteran with the Pemiscot County Sheriff’s Department got a special surprise last week. Lt. Holder was present in the Division II Courtroom with most of his coworkers, some family and friends last week at a meeting that Sheriff Tommy Greenwell called for possible “staff announcements.”

One of the best kept secrets was that Lt. Holder was this year’s 2010 recipient of the Richard P. Easter Award from the Children’s Trust Fund. According to Kirk Schreiber, Executive Director for the organization, one recipient in the state receives the award for each year and this is the tenth year the award was given.

Lt. Holder was nominated by Sheriff Tommy Greenwell. “Ryan works these cases that are very difficult,” Sheriff Greenwell said. “He can go from one room, speaking gently to a child, and then move to the next and deal with the perpetrator.”

Former Prosecuting Attorney Mike Hazel told the crowd that child sexual and physical abuse cases were “extremely difficult” to work. At times, speakers and the crowd were emotional, especially when reference was made to the recent murder of young Lillie Fowler. “Ryan worked that case, and it was hard… he did such a good job on it,” said Greenwell.

Lt. Holder was honored for his 12 years of working on children’s sexual and physical abuse cases. He told the crowd that the award was not “just his” but “represented the hard work of everyone in the room.” Lt. Holder is the Chief Criminal Investigator for the County.