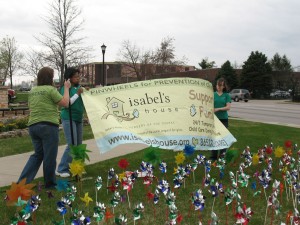 CTF has been a proud supporter of Isabel’s House in Springfield for four years.  Isabel’s House is the Crisis Nursery for the Ozarks.  It is a residential facility where children newborn to age 12 can come while their families face crisis or emergency situations. Children can stay for as little as 24 hours, or up to 30 days.

Francine Pratt is the Executive Director of Isabel’s House.  She says there are numerous reasons why caregivers could need to use it as a resource.

Isabel’s House has no income limitations. Anyone can use the services, and everyone will be given a service plan to help them deal with whatever situation they’re in.  Pratt says the ultimate goal is to strengthen families for the long term.  After children leave Isabel’s House, aftercare is provided to families on a monthly basis for up to a year.  It’s another asset in the effort to prevent abuse and neglect.

The Junior League of Springfield created Isabel’s House.  Pratt says Springfield is a perfect location for the crisis nursery because it helps address what are considered the area’s red flags, a high number of abuse and neglect cases.

She also says Isabel’s House helps the state by providing an alternative to foster care by strengthening families before abuse and neglect become a factor.

The staff at Isabel’s House is a group of highly trained professionals.  They meet requirements that assure they’re up to date on the latest techniques in child care. The service’s Family Advocates have the initial meeting with the caregivers to figure out their needs and make referrals to services and put a plan together. They work up a plan for the children as well. Pratt says 91% of those assisted by Isabel’s House stated they had a reduction in stress by using the services.

In addition to the dedicated staff, Isabel’s House relies on volunteers throughout the community.

AUDIO: Francine Pratt talks about the work of volunteers.

Isabel’s House is funded in three ways: through a contract with the state, grants, and community donors and contributions. The Missouri Children’s Trust Fund is in the fourth year of a five year grant award with Isabel’s House. This year, CTF has provided $24,000 to support direct services.  Isabel’s House also has fundraisers throughout the year, their biggest in February, called Oscar Night America.

CTF provides support to other crisis nurseries throughout Missouri.  Here’s a list: