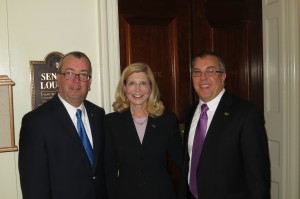 The Children’s Trust Fund (CTF) welcomes Nanci A. Bobrow, Ph.D., St. Louis, to the Board of Directors.  Dr. Bobrow was recently appointed to the Board by Governor Jay Nixon.  Her appointment was confirmed by the Senate January 30.

Dr. Bobrow, Assistant Clinical Professor of Pediatrics, St. Louis University School of Medicine, is a licensed Psychologist working with the Division of Endocrinology at Cardinal Glennon Children’s Medical Center.  She earned a doctoral degree in counseling psychology from St. Louis University.  As a practitioner, Dr. Bobrow has held numerous local, state and national leadership positions in the area of prevention as well as therapeutic intervention.  She previously served on the CTF Board serving as Board Chair from 2005-07, is a former Chair of the Task Force On Children’s Justice, and past President of Prevent Child Abuse Missouri.  She is also a member of the Child Abuse Neglect Review Board.  Dr. Bobrow and her husband, James, reside in St. Louis.  They have two children, Adam and Emily, and three grandchildren.