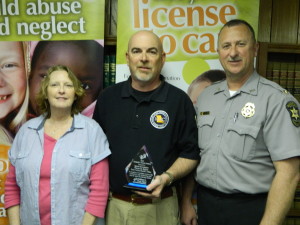 The Children’s Trust Fund (CTF) presented the 2013 Richard P. Easter Award to  Special Investigator Wayne H. Becker of the Dent County Sheriff’s Office at a ceremony in Salem on April 26.  The award was presented for his exemplary efforts in protecting children in Missouri.

Special Investigator Becker has been with the Dent County Sheriff’s Office for nearly nine years. He was previously awarded the Internet Crimes Against Children (ICAC) Grant, which assists state and local law enforcement agencies and individuals with specialized training and equipment to develop an effective response to cyber enticement, child pornography cases and other crimes against children. Becker is responsible for the south central region of Missouri consisting of Dent, Phelps, Pulaski, Texas, Shannon, Reynolds, Iron, Washington and Crawford counties.

The CTF Board of Directors established this award in honor of the late Richard P. Easter, former Director of the State Technical Assistance Team (STAT), who is remembered for his commitment and leadership in promoting statewide prevention efforts to better protect Missouri’s children. Since 2000, CTF has presented the award each year to a distinguished law enforcement officer in Missouri for exemplary contributions to the prevention of child abuse and neglect.