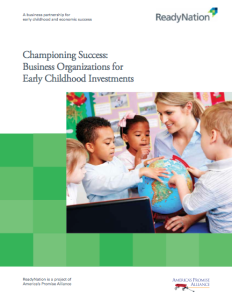 Ready Nation is an organization that works to enhance the message of business leaders that are in support of early childhood policies and programs that strengthen our economy and workforce. The organization partnered with the American Chamber of Commerce Executives to conduct a study on how business is interacting with and promoting early childhood education programs.  What it found was that in almost every state,  influential businesses have been voicing their support for lawmakers to enact legislation that supports early childhood policy or program initiatives.

Here’s a sample of what the study discovered: