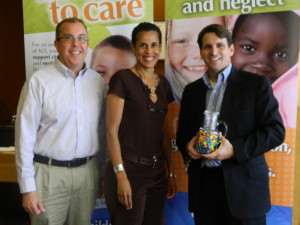 During the Children’s Trust Fund (CTF) Annual Fall Board meeting held October 16 and 17, 2013 in Jefferson City, the Board elected Charmaine Smith, St. Louis, as the new Board Chair, and Kathleen Boyle Dalen, Ph.D., Kansas City, as the new Chair-elect. Smith replaces outgoing Board Chair Tom Vansaghi, Ph.D., Kansas City, who has served in that role the past two years.  Smith, who has been a member of the Board since 2005, will serve a two-year term as chair until October 2015. She is the founder and executive director of Discovering Options, a St. Louis-based charitable organization that provides children with comprehensive support and enriching after-school programming.  Smith was appointed to the Board by Governor Nixon in 2010.

Dalen, a psychologist, was appointed to the CTF Board in 2009.  She is currently vice president of the Partnership for Regional Educational Preparation (PREP-KC) where she works closely with the leadership of Kansas City’s urban school districts and post secondary institutions to support the implementation of research-based strategies to increase college and career readiness for urban students.  Dalen will serve as chair-elect during the same time period ending 2015.