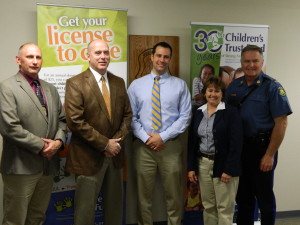 Trooper Sublette is a member of the Missouri State Highway Patrol.  He is a computer technology specialist and a skilled investigator of child exploitation cases. Trooper Sublette was instrumental in redeveloping the Digital Forensics Investigative Unit (DFIU) to allow more proactive investigations and developed an innovative case management database to permit an increased caseload.  He received the award before his family, fellow officers, peers and other department members during the appreciation ceremony, which included presentations from:

The CTF Board of Directors established this award in honor of the late Richard P. Easter, former State Technical Assistance Team (STAT) Chief, who is remembered for his commitment and leadership in promoting statewide prevention efforts to better protect Missouri’s children.  CTF presents the award each year to a distinguished law enforcement officer in Missouri for exemplary contributions to the prevention of child abuse and neglect.